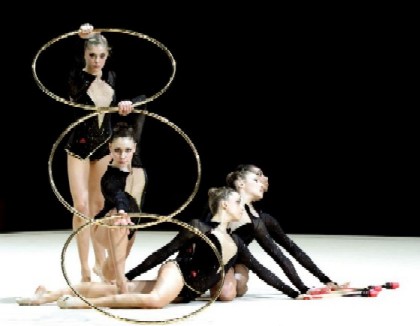 Women's artistic gymnastics are performed on equipments such as: uneven bars, balance beam, vault and floor exercise. In this article, I will focus on rhythmic gymnastics, which is a beautiful, graceful but challenging sport.

Rhythmic gymnastics is a sport that combines elements of ballet, gymnastics, dance, and apparatus manipulation. It has a lot more dance than artistic gymnastics. Everything is done on the floor with different routines and music. It is such a little known and hardly recognized sport in the US.

The athletes manipulate one or two apparatus such as: a rope, hoop, ball, clubs, ribbon and Free (no apparatus also called "floor routine"). Gymnasts perform jumps, tosses, leaps and other moves with different types of apparatus. They are judged more on their grace, dance ability and coordination than their power of tumbling ability.

Gymnastics goes all the way back to ancient Greece. The ancient Greeks started it as a beauty and fitness practice and then later evolved as a sport.

All Greek cities had a gymnasium, which was a courtyard for jumping, running and wrestling. Physical fitness was very important for the ancient Greeks. Because of Roman influence, Greek gymnastics became part of the military training. But, in 393 AD, Emperor Theodosius stopped the Olympic Games. Gymnastics as a sport did not grow in popularity and as a result, the sport remained forgotten for many centuries.

By the late eighteenth and early nineteenth century, gymnastics was reborn.

Rhythmic gymnastics is a 19th century idea started by I.G. Noverre, Francois DelSarte, and R. Bode. They believed in movement expression, where one used dance to express one self and exercise various body parts. This idea was further developed by Peter Henry Ling in his 19th-century Swedish system of free exercise, which promoted "aesthetic gymnastics," in which students expressed their feelings and emotions through bodily movement.

In the early nineteen fifties, the Russians started Rhythmic gymnastics as an independent competitive sport. By 1962, the International Gymnastics Federation officially recognized rhythmic gymnastics and held the first World Championships in 1963 in Budapest, Hungary.

Even though it has its own world championships rhythmic gymnastics did not become an Olympic medal sport until 1984. Group competition was added in 1996.